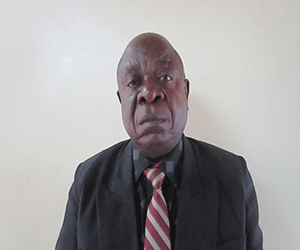 Prof. Kagoma S. Mnyika completed Kibaha Secondary School in 1971 and Doctor of Medicine Degree (M.D.) at the University of Dar es Salaam (UDSM) in 1982 He began Medical career as Tutor of Clinical Officers at the Bugando Catholic University of Health and Allied Sciences (CUHAS) from 1984 to 1986. He completed postgraduate training as Master of Science in Tropical Diseases Control (MSc TDC) at the UDSM in 1988 and PhD at University of Bergen, Norway in 1996. He joined the Department of Epidemiology and Biostatistics of Muhimbili University of Health and Allied Sciences (MUHAS) in 1988 as Assistant Lecturer and rose to Lecturer in 1992, Senior Lecturer 1997 and Associate Professor in 2010, in which position he held until retirement in 2018.

Prof Mnyika was Head of the Department of Epidemiology & Biostatistics, from 1997 to 2006 and Academic Coordinator of the link between the Department of Epidemiology and Biostatistics of UDSM and Manchester University, UK from 1989 to 1993. He has been the Founding Editor-in-Chief of the East African Journal of Public Health based in Dar es Salaam and from 1996 to 2011 the National Co-ordinator and Principal Investigator of the Collaborative Programme on Health Systems Research and Health Promotion in Relation to Reproductive Health in Tanzania and South Africa, a project supported by the Norwegian Centre for International Cooperation in Higher Education (NUFU). From 2005 to 2011 he served as a member of the Tanzania Food and Drugs Authority (TFDA) Drugs and Vaccine Technical Committee, and from 1993 to present he is a member of the National Polio Expert Committee of the Ministry of Health.

In July 2018 he joined the International Medical and Technological University (IMTU) as Associate Professor and Deputy Vice Chancellor (Academic, Research & Consultancy) and subsequently appointed as Vice Chancellor in November 2018